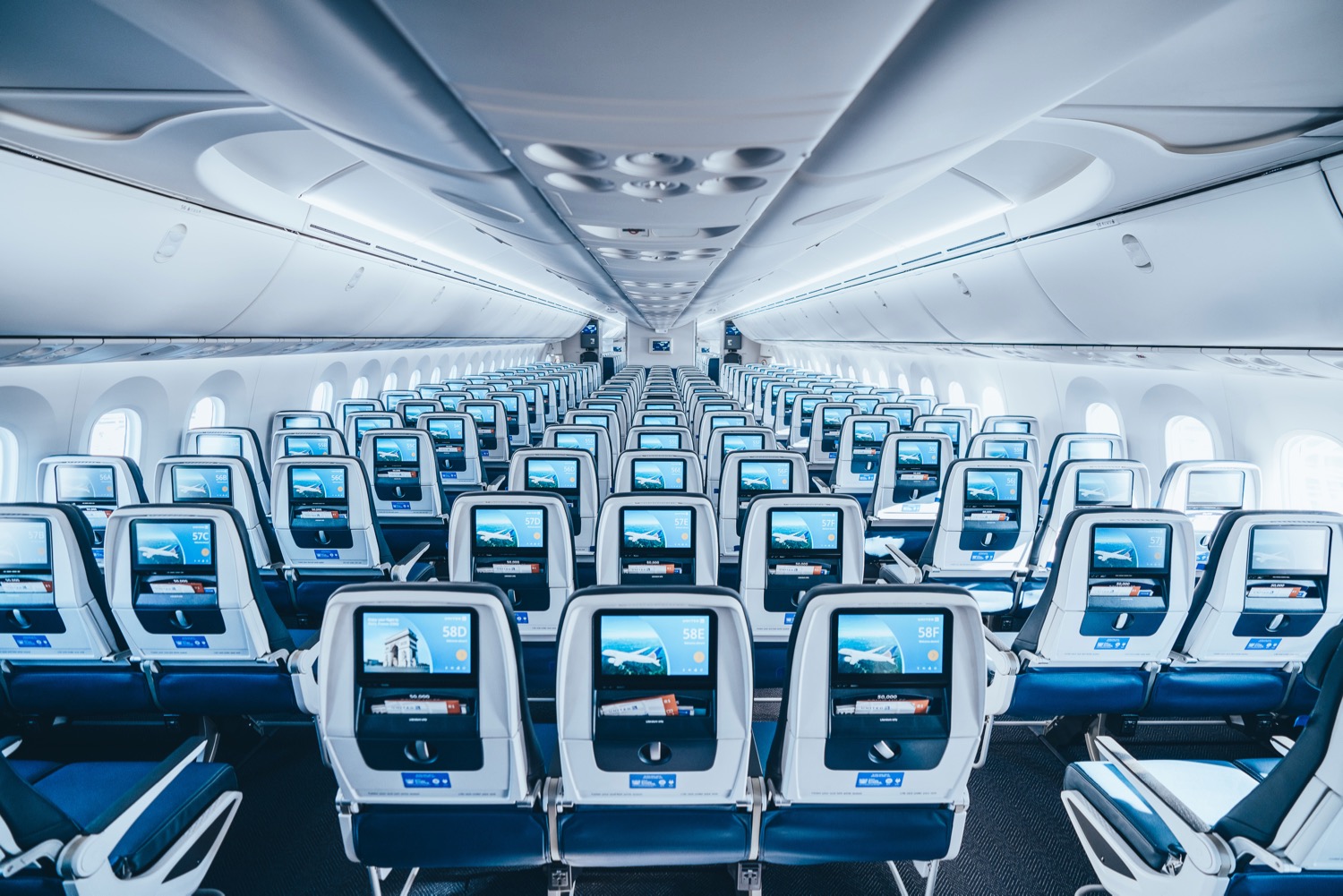 Traditionally, there are three cabin classes offered on long haul airlines, Economy, Business and First. Although premium economy is quickly becoming a cabin class in it’s own right. Some of us make do with economy, but for those looking for something extra there is the option to upgrade. Specifications and luxuries differ between airlines, but we will take you through each class to give you an understanding of what is typically expected from each cabin class.

This is the most basic of cabin classes and consequently the most cost effective. These seats offer the least luxuries, namely leg room. Pitches can vary from 28-34 inches, and seat width between 17-33 inches. These differences may seem minimal, but on an 8+ hour flight, your knees will likely feel it. Before you book, make sure to research the different airlines operating the route, and if you can, opt for the one offering more room in economy. It is also important to remember that seats in economy are in rows, so if you find yourself placed somewhere central with no direct aisle access, the less pitch space there is the bigger the struggle to get to the aisle.

Other features that will vary in economy (or not feature at all) are power outlets, Wi-Fi, amenity kits, in flight

entertainment, screens and food. The level of service and attention in economy is lower than that in a higher class. Not quite premium economy, but some airlines offer an economy ‘plus’ (or economy comfort, among other names). These limited seats are still within the economy cabin, and offer a little extra comfort, again this varies by airline.

The premium economy seat provides travelers with a larger seat, with recline and more legroom. Premium economy is a cabin of it’s own between economy and business class. Generally there is a larger entertainment screen, and more on offer in the amenity kit. Not to mention a greater luggage allowance, and a better selection of (and frequency of) food and drink.

Extra luxuries and comfort do come at a cost. To upgrade to premium economy, you could expect to be paying around 40% more than the price of an economy seat.

The luxuries of business class over premium economy are immediately evident. Some airlines have abandoned first class seats altogether because business class has become so good. With a business class seat you can come to expect an executive airport lounge, priority boarding and perhaps even a chauffeur service within a certain distance of the airport. Service in business class is a considerably higher standard, and much more accessible than that in economy.

Seats and room are not a concern in business class, seats are in an armchair style and often lie fully flat. These seats all have direct aisle access and a booth like layout for privacy, with desk and storage areas. Screens are larger and of a higher tech, often touch screen. The amenity kits include deluxe toiletries, often in collaboration with luxury big name brands. Some can even expect pyjamas. The allowance of checked luggage is considerably higher than that of economy and premium economy. Lastly, three course meals are served in a fanciable fashion on china plates, and beverages are often unlimited.

To upgrade, you could expect to pay around 65% more than the price of a premium economy seat. Business class tickets are around four times more expensive than economy.

Of all the cabin classes, this has the most to offer you as a consumer therefore making it the most expensive. As a first class passenger you can expect all of the benefits of business class, with a few luxury extras. For example, larger or more premium branded amenity kits, as well as even more privacy and space. On some airlines first class consists of enclosed private suites. Some airlines may offer fully flat recliners with massage functions, duvets and pillow. You might also be provided with private check in or an expedited security line. First class varies greatly between airlines which offer this cabin and tickets have been known to reach up to five times the cost of business class seats.

To compare airlines and the features of their cabin classes, click here

We reduced Creative Resins Distributions travel spend by 16% in 2016

Creative Resins has been at the forefront of decorative glass technology for over 30 years. When Louise contacted us to help with a trip to Oman, we discovered that the company had been using a particular airline’s website to book direct, paying in excess of £5,000 per trip in Business Class. Using our negotiated fares on this one flight YourTravel saved them £1,221. Upon further investigation and a year’s great relationship, we reduced our client’s travel spend by 16% whilst providing a high level of service.