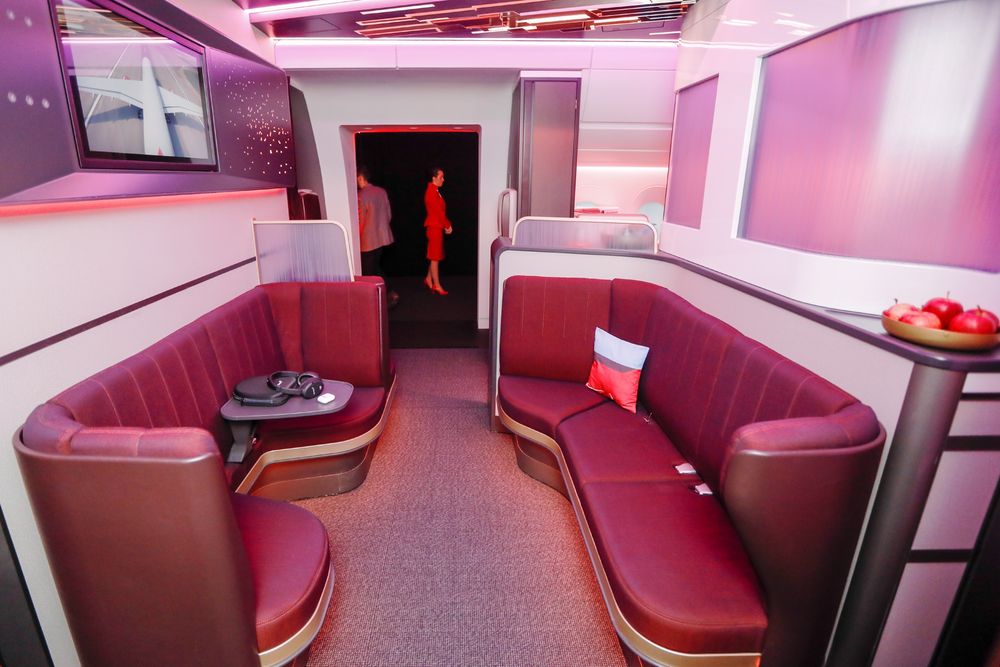 Last month in London, the airline giant Virgin Atlantic revealed it’s new plane. Virgin Atlantic are set to launch the first of their Airbus A350 fleet, named ‘Red Velvet’, late this summer. A total of twelve have been ordered for delivery by the end of 2021, however only three will be flying by the close of 2019. The three A350’s will fly from London Heathrow to New York JFK, Atlanta and Los Angeles. By the time all twelve are in operation, the intention is to fly from both Heathrow and Gatwick.

The cabins on the Virgin Atlantic A350’s are unsurprisingly stylish and impressive. Here is what you can expect.

As soon as you step on the plane, the difference is noticeable. Upon boarding you are welcomed through to a foyer like area on the plane called ‘The Loft’. Initially, this is where you are welcomed and directed towards your seat. The Loft is situated between the economy cabins (including premium) and upper class. When the seat belt lights are switched off, this becomes a social area, seating ten, for first class passengers to relax together.

There are 235 seats in economy on the A350’s, in a 3-3-3 configuration. Each seat comes with USB ports, power sockets, adjustable headrests and 11.6inch seat back TV screens. In the front four rows of economy is a larger 34in pitch for optimum legroom.

In a 2-4-2 arrangement and made up of 56 sublimely comfortable leather seats, premium economy has never looked so attractive. The 13.3in TV screens can be controlled by your mobile, rather than by touch screen and potentially irritating the passenger infront.

Now for the really remarkable stuff! Virgin Atlantic aim to offer first class experiences at business class prices, and thus formed the merged ‘Upper Class’. Where the previous upper class design had seats faced inwards, thee Virgin Atlantic A350’s will have all upper class seating facing towards the windows. Which are panoramic by the way. In a 1-2-1 layout, all 44 upper class suites still provide enough privacy, even if you’re in the middle seats.

The seat slides forward to create a flatbed. Duvets and pillows are thick and comfortable. Pre-order pyjamas to fit, and opt between shorts or trousers, long or short sleeves. Amenity bags include large toiletries so you wont need to pack much, if any, of your own.

Each cabin has a cocktail table, with shelving and storage space as well as adjustable mood lighting. TV screens are 18.5in and again operable from your phone, and can be swivelled for a perfect viewing angle. The cabin itself is adorned in off whites, with corals and dark reds.

International travel has become particularly onerous and so it is essential to find agents who can help alleviate the stress of sourcing a competitive price, organising itineraries, booking the travel, accommodation and associated services. YourTravel has provided an exceptional level of service, working with our Company to understand our requirements, tailoring the various flights to ensure the maximum amount of time for our business to be conducted with the least time wasted.

Their representatives have been professional, highly competent and a pleasure to work with, going the extra mile on all occasions. We have experienced excellent service, most particularly from their representative Lauren Townsend, who obtained competitive rates with an exacting itinerary and, importantly, have monitored our recent travels over a two and a half week trip through various time zones to assist in arranging boarding passes and booking seats.

We would highly recommend YourTravel for both business and personal travel and will be using them for our future bookings.